Raspberry Pi B vs B+ Power 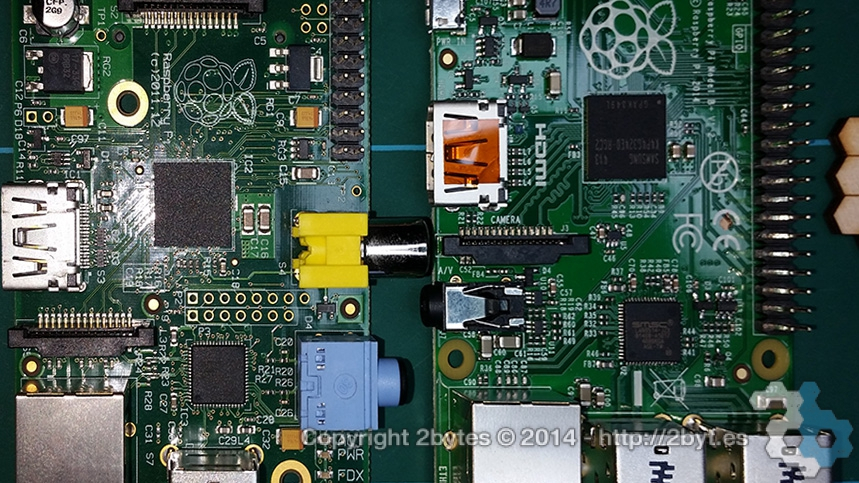 With the recent release of the Raspberry Pi B+, I was lucky enough to be working right next to Westminster bridge where the very kind Element 14 were giving out free Raspberry Pi B+ and Ice Cream, both of which I managed to get my hands on, thanks guys!

One of the key factors that interested me with the new Pi was its move to more efficient switching regulators instead of the old linear (read: inefficient) ones it had before. This move, the Raspberry Pi Foundation tell us lowers the power consumption of the little board noticeably.

Being that I tend to run my Pis 24/7 (I now have a Pi Running OpenVPN, and a Pi running Seafile), the smallest difference with this relatively low power device should be significant.

Seafile had proved difficult on the B, as there are difficulties powering external HDDs from its restricted USB current output, the B+ promised to solve this, and I can tell you that it delivers! Read on for the numbers!

The first test shows both Pi’s idling on the graphical desktop (running startx from the terminal after logging in). At this point, both Pi’s are using WiFi connected to a WiFi N network in the next room, with the USB KB/Mouse dongle attached and HDMI to a monitor. 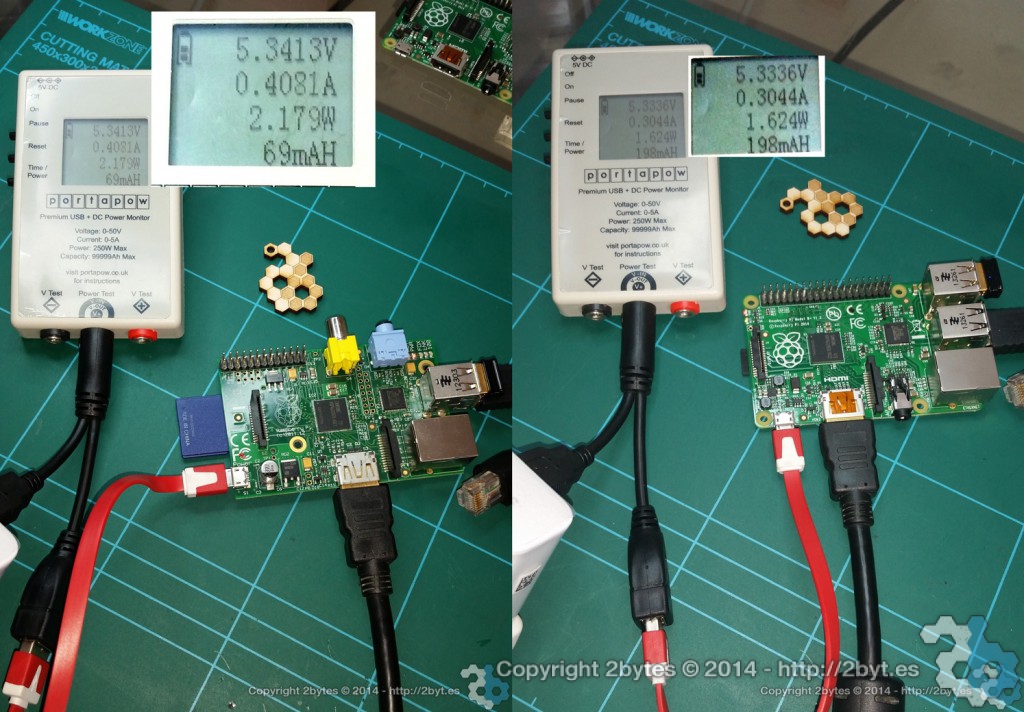 Model B, left, and Model B+ right.

The little 2bytes logo in each image reminds me these were running the graphical desktop as I didn’t manage to get the display into the image!

NOTE: Ignore the mAH reading on the meter, this is the total charge that has flowed since the last time I reset the device. This kind of reading is useful to see how much battery power you consume over time!

This test involves running the Pi, without a graphical desktop, but instead using the “stress” tool (See here) to max out the CPU of the Pi to 100% and artificially fill up RAM.

This is not of course an exhaustive way to test out the Pi under full load, but it does give a reasonable indication of the power consumption when the CPU is under heavy load and RAM being filled. This also doesn’t account for GPU use, but perhaps an update can cover that with some rendering tests etc. 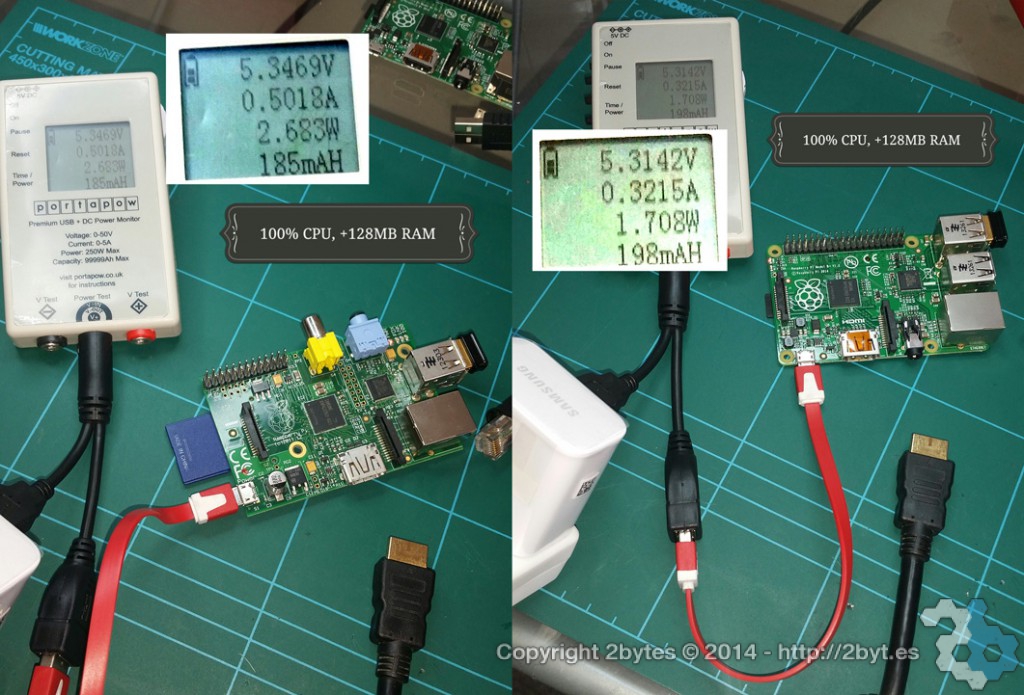 Model B, left, and Model B+ right.

As can be seen, even under load, the B+ keeps its cool weighing in below the 2W mark for a whopping 0.91W saving over the B!

This final test does not include the model B because frankly it’s just not possible. Here, the B+ is directly powering a WD Passport 500GB external USB HDD. 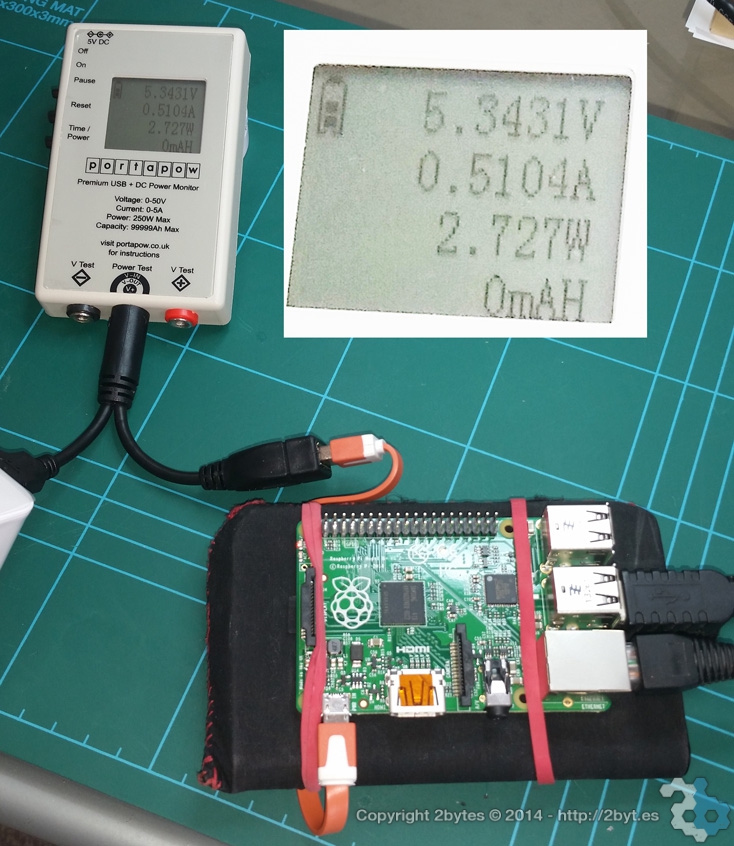 Seafile server hosting a Seafile cloud (because i’ve had much better results than with Owncloud).

As can be seen from these quick tests, there is certainly an improvement in power consumption due to the new switching power supply in the B+, and coupled with the USB current increase, the Pi can now be used with external HDDs much more easily without the need for powered hubs or spliced cables.